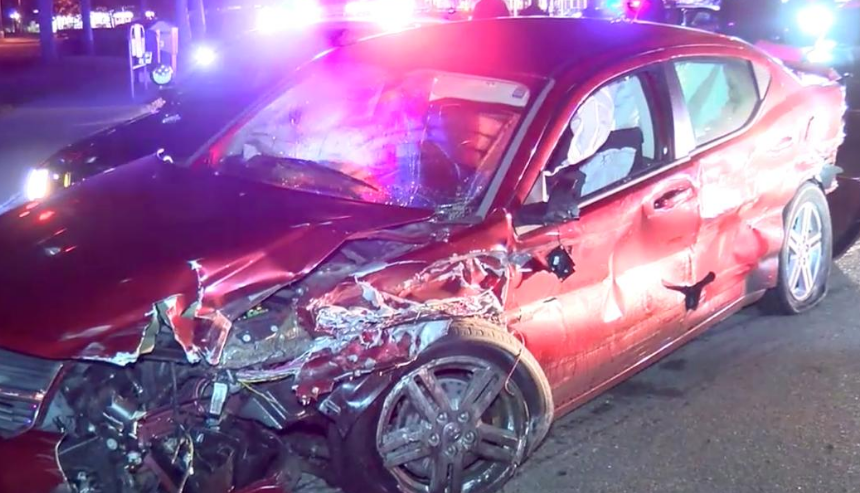 Three juveniles were in custody after a pursuit that began in Anaheim and ended in a crash in Buena Park on Monday night, authorities said Tuesday.

A Fullerton man told police he thought he heard a prowler trying to get into his home in the 1200 block of Valencia Avenue shortly before 10 p.m. Monday, Fullerton police Sgt. Jon Radus said. He found no sign of a break-in, but noticed his car a red 2009 Dodge Avenger was gone.

Our officers attempted to initiate a felony traffic stop and the vehicle fled leading them on a brief pursuit, Wyatt said.

The chase stayed on city streets until winding up on the northbound I-5 freeway, reaching speeds of more than 100 mph. The fleeing vehicle exited the freeway at Auto Center Drive in Buena Park, but couldnt negotiate the turn and crashed into a guard rail, Wyatt said.

Officers from several agencies converged at the crash site and discovered four male juveniles in the car. Two of the boys were taken to local hospitals with non-life-threatening injuries sustained during the crash, Wyatt said.

With juvenile cases, suspects are not typically booked into the Orange County Jail pending charges. They are either released to their guardians or detained at Orange Countys Juvenile Hall.

Three of the four boys were eventually handed over to county juvenile hall officials on suspicion of vehicle theft, residential burglary and gang enhancements, Radus said. The fourth juvenile was released to his parents due to injuries and will be petitioned for charges at a later date.

Due to their status as minors, the minors names, ages and cities of residence are not being released.