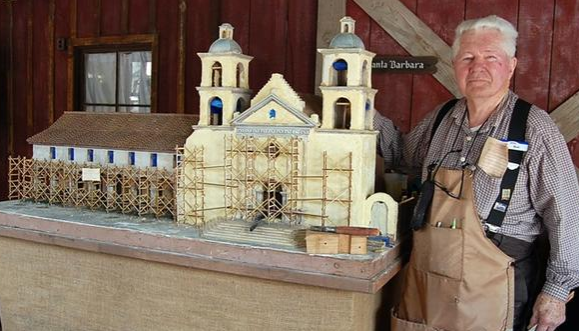 San Juan Bautista, San Luis Rey de Francia, Santa Ines... Knowing the names of the 21 California Missions, and where exactly they're located, is important historical knowledge possessed by many a Golden Stater.

But seeing all of our beloved missions in a single day? That's not a possibility. Travelers must plot out a week, at least, to fully visit, then view, the centuries-old landmarks.

Seeing all of the scale models of the missions, though, in a single day can be done, and has long been done, at Knott's Berry Farm. The theme park's missions in miniature have been a popular exhibit in the Buena Park attraction since the 1950s, when "Walter Knott needed a way to keep park guests off the of the stagecoach trail between the train depot and the northern end of the park (for safety reason."

A loving tribute to the missions was thusly borne, thanks to the work of Leon Bayard de Volo

But the buildings, which are located near the south entrance to Fiesta Village, were removed over three years ago for a much-needed full-scale restoration. That careful and considerate refurbishment was recently completed by Bob Weir, a masterful craftsman who has served as the head of the theme park's woodworking shop for two decades.

Fourteen scaled mission models returned to view on the final day of November 2016, with the rest to roll out in the near future.

There is a mission-sweet festivity ahead, and one all Californians who studied the hallowed structures in school will understand: Students are invited to display their own California Mission models near the Knott's Berry Farm missions at Early California Day, which is scheduled for March 15, 2017.

Details? Give Knott's Berry Farm a jingle to find out more on Early California Day.