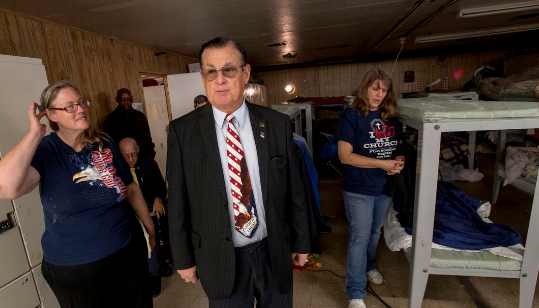 Wiley Drake, 73, the churchs longtime pastor, vowed to keep the city away and the doors open.

On Jan. 30, in the wake of the Oakland warehouse tragedy, the city revoked an occupancy permit it granted Drake in 1999 to use a building as a temporary dormitory. The pastor was instructed to vacate the shelter by Thursday and remove or demolish the building by early March.

This is about the well-being of those (homeless) individuals, said Aaron France, assistant to the city manager. We care about our homeless neighbors. ... This is a matter of safety.

The shelter has 52 beds, showers, tables, lockers, WiFi and television. Meals are offered in a kitchen on the lot twice a day.

A couple of dozen residents range in age from 6 to 80.

William Ruffin, 64, has lived in the shelter for 23 years. He handles security on the lot and helps with Bible study.

This place gives me a sense of peace, he said. A lot of people come here afraid. Theyve slept under bridges, on streets. They come here ... and feel secure.

Lisa Pollard joined the community six weeks ago, living out of her car on the lot.

I walked in here and it was the first time I knew I was safe, the 54-year-old said.

Many of the men and women in the shelter have part-time jobs, Drake noted, but cant afford to live elsewhere.

In 1995, First Southern Baptist Church, at Western Avenue and Melrose Street, was used as a shelter for 235 residents some homeless displaced by a flood.

Three dozen men and women continued living on the lot after relief efforts, and in 1997, a judge ordered Drake to either move those individuals to another location or build another structure.

Temporary industrial-style buildings were donated to the church in 1999, Drake said. The city that year granted the pastor a temporary occupancy permit with the understanding that a permanent shelter would be built. Every few years, the city extended the temporary permit.

But no permanent building has been erected.

In March, city representatives inspected the property, and Police Chief Corey Sianez provided Drake a list of fire and life-safety issues to address.

After the December warehouse fire that killed 36 in Oakland, Buena Park officials returned to the churchs shelter on Jan. 24 and found few improvements at the buildings that have been melded together.

We respect what Pastor Drake is doing here, said Gigi Zanganeh, the director of programs for CityNet, a nonprofit the city contracts for homeless outreach, but we care a lot about client safety. Given the situation in Oakland, this (relocation) is probably for the best.

Last week, Drake, who once filed a lawsuit challenging the legitimacy of former President Barack Obamas birth certificate and twice ran for president, refused to let any city personnel onto his property.

City officials planned to obtain a warrant so they can go onto the property as soon as Thursday and declare the building unsafe to occupy.

The pastor can appeal the citys decision to a board, consisting of three independent building officials or engineers. But the shelter must remain vacant during an appeal.

Drake said if his shelter is shuttered, hell move the homeless into the church itself.