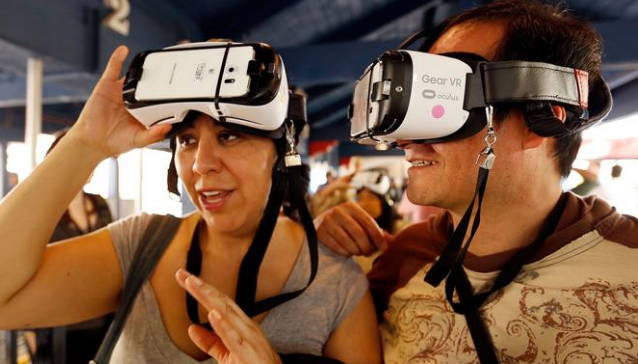 Knotts Berry Farm is getting in on the latest theme park craze: putting visitors in a virtual world created primarily by software engineers instead of carpenters and welders.

The new VR Showdown in Ghost Town, which opens next month at the Buena Park theme park, will put virtual reality headsets on up to 16 visitors at a time, letting them shoot futuristic blasters at robot creatures in a battle to save the historic ghost town.

Many new theme park attractions in Southern California rely on 3-D technology and motion simulating seats, including the new Harry Potter and the Forbidden Journey and Despicable Me: Minions Mayhem rides at Universal Studios Hollywood. (The park ditched the Harry Potter 3-D but said it wasnt because riders complained about nausea.)

But smaller regional parks are turning to virtual reality headsets to immerse visitors in a new world without the expense of building sets, erecting towers and installing hydraulic powered seats.

Six FlagsMagic Mountain in Valencia began last year to strap virtual reality headsets to riders of its Revolution roller coaster to give them the sensation of flying through space as they shoot at alien aircraft. Similar virtual reality elements were added to roller coasters at nine Six Flags parks across the country.

Its a very cheap way to add a new attraction or extend an older attraction, said Martin Lewison, a theme park expert and business management professor at Farmingdale State College in New York.

A major benefit of using virtual reality headsets is that the experience can be changed or overhauled simply by writing new software for the headsets.

Another advantage to the virtual reality headsets is that the world seen by parkgoers is interactive, so the experience is never the same twice.

At Knotts Berry Farm, the new attraction lets visitors score points by destroying the bad robots and completing objectives, said Ivan Blaustein, director of product integration at VR Studios, the company that created the headsets and software for the theme park.

One of the drawbacks of using virtual reality headsets, said Lewison, is that each headset needs to be cleaned after every use, which can reduce the number of people who can ride the attraction per day.

Knotts Berry will be charging an introductory price of $6 to try the new attraction, on top of the regular park admission price.

When visitors pay ticket prices of at least $99 to enter Disneyland or Universal Studios, he said they expect to see expensive animatronics and movie-quality sets that create an immersive world.

Theme park purists dont like it, Lewison said. Theyd much rather go on a $250-million ride at Disneyland than throw a mask strapped to a Samsung smartphone over my eyes.