Polynesian Dance Troupe Went From a Buena Park Garage to the World Stage! 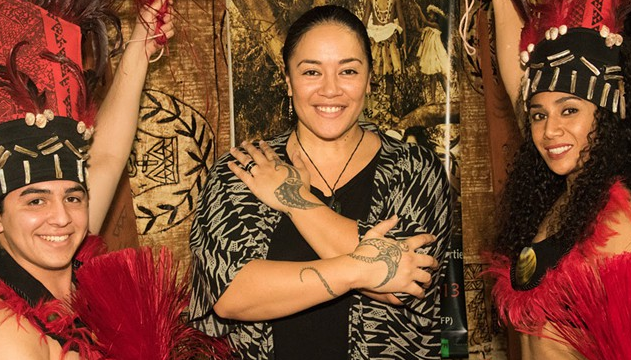 Half a century ago, in a mostly white neighborhood in Buena Park, there lived a woman who had brown skin and didnt speak any English. One day, her daughters high-school talent-show committee invited parents to participate, so she signed up. During a rehearsal, the principal saw her practicing her act and informed her that it was a bit too sensual and inappropriate for a high school. She wound up performing anyway. It was a hula dance.

Shortly thereafter, all of the neighborhood moms started knocking on her door, begging for instruction. Estella Nonosina Reid gave these women, her first students, dance lessons in her garage in exchange for English tutoring. The women then asked if Reid would teach their children, and they paid for a tiny space in Buena Park. Thus was born the Nonosina Polynesia Dance studio.

Today, the dance company thrives in a larger space in Anaheim. The studios reputation has grown so much that students now come from as far away as Tijuana, San Luis Obispo and neighboring states to attend classes two to three times per week. And while Reid still attends the classes regularly to watch over her flock and keep everyone in check, her granddaughter Tiana Nonosina Liufau now instructs the classesthat is, when she is not traveling the world with her dancers.

Liufau was born and raised in Anaheim, attended UCLA (where she studied World Arts and Culture/Dance), and she very much considers herself a Southern California girl. Still, she strives to maintain a connection with her familys traditions. I am constantly back in the islands to just help me stay rooted and guided, Liufau says. The music and dance traditions of her Samoan and Hawaiian ancestors are the products of the Polynesian philosophy, and Liufau feels that her calling in Orange County is to impart that way of life to her students. A lot of my dancers are not in touch with their heritage, and Polynesia is very much come one, come all; when you eat with us, when you sing with us, when you dance with us, youre part of our family, she says.

At the studio, the dancing does not come first. Liufau explained that the physical aspect of dancing is a means by which spirituality is achieved through the art of storytelling. The poetry comes first, she says. That is far more important than the dance. . . . The music is inspired after that, and then the movement is inspired. While many of the Nonosina companys Ori Tahiti dance movements are slow and delicate, some appear quite frenetic and have even been compared to twerking. When Westerners first came to the islands, about 250 years ago, Liufau points out, our dance was banned immediately because it was [considered] erotic, savage and not Christian-like.

Taken out of its cultural context, the dance form appeared vulgar to the Christians; however, its true function is nothing short of divine. Most of our movements mimic nature and the way it moves, Liufau says. We are celebrating living harmoniously with Mother Nature.

Sensuality permeates all aspects of the culture, from language to colorseven lovemaking, itself, is nothing short of a traditional artform. The ancient Polynesian belief system is when you are procreating, you are keeping tradition and bloodline lineage, Liufau explains. The dance keeps going, the drum keeps playingits all intertwined. The Polynesian bass drum, the pahu, represents the human heart, and as long as that pahu is still beating, as long as we are still teaching a little song, a dance, hand movement, then the heartbeat of our Polynesian people will never die.

The philosophy and spirituality of the Polynesian peoples arts are fairly secular. Liufau says it is really all about showing love, gratitude and respect to ones ancestors, wherever they are from. The majority of my dancers are not Polynesian, and I dont ever want them to think they have to be Polynesian to feel this, she says. We have that sense of connectivity to our roots in every single culture. . . . So I always tell them, I want you guys to connect. [Use the Polynesian song] as a vehicle to connect to the ancestors or the ones that came before you, or even your loved ones that are still alive but are maybe far away or back in the homeland.

The Nonosina Polynesia Dance company has had an ongoing business relationship with Disney for almost as long as the Nonosina studio has been around. As one of the first Polynesian dance studios, and with its Anaheim location, Disney reached out to Estella Reid to produce its Tahitian Terrace Luau show. The studio provided a convenient source to supply Disney with the dancers and musicians it required for the show. The Tahitian Terrace was replaced by Aladdins Oasis in 1993, but, Liufau says, Once youre in with Disney, theyll always reference you or keep you in mind.

Other collaborations include a California Adventure tie-in with Lilo & Stitch, for which the troupe helped with casting musicians; a referral to the TV series Survivor, which the troupe performed music for. Plus, for two and a half years, Liufau has been involved with the hit animated feature Moana, for which she provided choreography and more. A recent experience brought her family full-circle with Disney, she says: An older gentleman that was in charge of one of the first events I did [for Moana] looked at me and asked, What dance group do you choreograph for? and I said, Nonosina, and then he started crying and told me, Do you know that Im the exact gentleman that hired your grandma for the Tahitian Terrace?

In addition to these more well-known experiences, Liufau says that many of her dancers, as well as the troupe as a whole, have done well in various Polynesian dance circuits, including those of Northern California, Southern California and the Hawaiian island of Kauai. She also proudly reveals that the Tahitian government recognized the groups contribution to the culture. In 2001, the Nonosina Polynesia Dance studio was asked to perform an award-winning dance piece in Tahiti, after which, Liufau says, beaming, The [French Polynesian] president at the time wrote us an official letter asking us to do a cultural exchange. Currently, she judges an annual international competition there.

Liufau balances her troupes ongoing performances and workshops in Hawaii, Mexico and Japan (evidently, Tokyo is the biggest hub for Polynesian dance) with teaching her regular classes at the studio; most of the touring occurs between semesters and during various Western holidays, such as Easter and Thanksgiving. Such a schedule seems overwhelming, but Liufau says the rewards are inherent in the tradition, adding, What drives me is the satisfaction I get in seeing how much the students grow spiritually.