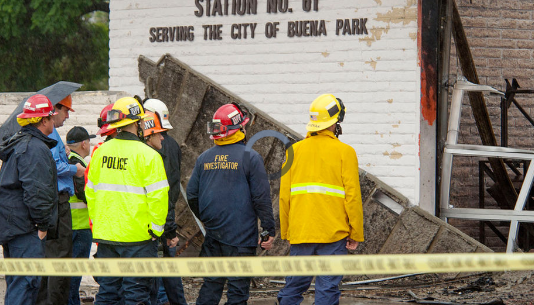 BUENA PARK Orange County Fire Authority firefighters battled a blaze at one of their own station houses for much of Thursday that left the structure severely damaged and destroyed four vehicles including a 100-foot-long aerial fire truck.

The fire broke out around 3:30 a.m. at Station 61, at 8081 Western Ave., across the street from Knotts Berry Farm. It was unclear what caused the flames at the aging station house, earmarked to close and make way for a new, $13 million station house nearby.

The likelihood of this being repaired and used again is slim, fire Capt. Larry Kurtz said.

More than 60 firefighters from multiple agencies used tower-mounted hoses for much of the fight, because the fire was so hot and the structure so unstable; fire officials deemed a ground battle too dangerous, Kurtz said.

Ground crews finally were able to enter around 8:30 a.m., with hotspots lingering until 2 p.m.

At 3:11 a.m., Engine 61 was dispatched to a medical call, about a mile and a half from the station house.

They (Engine 61 personnel) were dropping that patient off at a local hospital when they got the call that their station was on fire, Kurtz said. They raced back to fight their own fire.

The firefighters inside Station 61 all escaped the burning building without injury, but a $1 million 100-foot aerial fire truck, one battalion chief Suburban, one swift-water rescue vehicle and one boat used for swift-water rescues were destroyed.

In all, about $1.5 million in firefighting equipment may have been lost in the blaze, Kurtz said.

The bottom line is were so happy there were no injuries, Buena Park Mayor Beth Swift said. Shocking as it is to have a fire at a fire station, the firefighters know their jobs and they do them well.

Investigators from the Fire Authority, the Anaheim Fire Department and the Bureau of Alcohol Tobacco and Firearms were expected to sift through the debris for clues as to the fires cause.

Throughout the morning, while the firefighters tried to put out the fire, rain fell sporadically, heavily at times.

Its not so much of an aid as one might think, Kurtz said. In this case, when the roof has burned off, the gallons-per-minute the rain provides doesnt make a significant enough impact to help extinguish the fire.

The fire will not impact any calls for firefighting or paramedic coverage, Kurtz said: We have plans in place for scenarios like this. Were a very large organization, and we have plenty of backup apparatus and quarters.

Backup vehicles are being outfitted and moved into the area, Kurtz said. Plans are being made to use a local hotel or motel to house firefighters until more permanent accommodations can be worked out.

The city has been looking into the possibility of constructing a new fire station nearby on La Palma Avenue.

The mayor, who went to the station at around 5 a.m. Thursday, said the fire would put the plans to replace the building in fast motion, but the city still needs to find funding.

The current site annually answers about 6,000 service calls. The 50-year-old station, which is owned by the city and insured, has real issues, and weve been putting Band-Aids on the situation, Aaron France, assistant to the city manager, recently told the Register.

The outdated and aging Fire Station 61 has undergone several roof repairs over the years, city officials said. The new station would go between a shopping plaza and Walter Knott School. In 2015, the city agreed to swap Fire Station 61s acre for a Knotts lot on La Palma Avenue.

But the city needs to come up with money to build the new station, perhaps with a bond issuance and paying off the fire station over time. Under the plan, the city would demolish the old building before Knotts takes it.

At 18,000 square feet, the new one-story station would house 36 fire personnel. Steel framework would be used to make it more durable and save $1 million compared to using wood.

Thursday afternoon, with its garage doors burned away, passersby could see what was left of Truck 61 a melted light bar and headlights dripped onto the vehicles cab. The battalion chiefs SUV, once fire-engine red, was gray. Bits of roof and insulation dangled, as water flowed from rain and still-active hoses.

This wasnt the first time a fire station burned in Orange County.

We had a fire station that burned in Irvine on Dove Street, near John Wayne Airport, a few years back, Kurtz said.